According to an Office for Rail and Road (ORR) report on national highways, most regions are performing at or above the national target for pavement condition.

The report – Comparative analysis of national roads – notes that four of the six regions have performances close to or better than the national objective of ensuring that 95% of the network does not require additional maintenance examinations.

The North West and South East both have the best performers (97%), while Yorkshire and the North East and South West follow closely at 96%.

According to the report, there are several possible explanations for the lower condition level in the East. One factor is that the Eastern region has a high proportion of Strategic Road Network (SRN) concrete roads. However, this “only partially” explains the performance gap since 5% of the roads in the East are concrete, compared to 2% for the whole of the SRN.

The report adds: “A large proportion of SRN roads in the East are A-roads (83% by road length compared to 57% for the whole of the SRN). We have seen evidence that, on average, pavement condition tends to be maintained at a higher standard on motorways than on A-roads, which you would expect given the higher traffic volumes on the highways.

“Also, as the road network in the East is more extensive than in other parts of England, there are fewer parallel roads to accommodate traffic during maintenance periods. This will make it more difficult for national highways to deliver pavement renewals.

Nationally, National Highways has now maintained pavement condition at or slightly above the 95% target for four consecutive years. Performance declined slightly in 2020-21 from 95.4% to 95.2%, but in most regions little change was seen between 2019-20 and 2020-21 (see table below) . 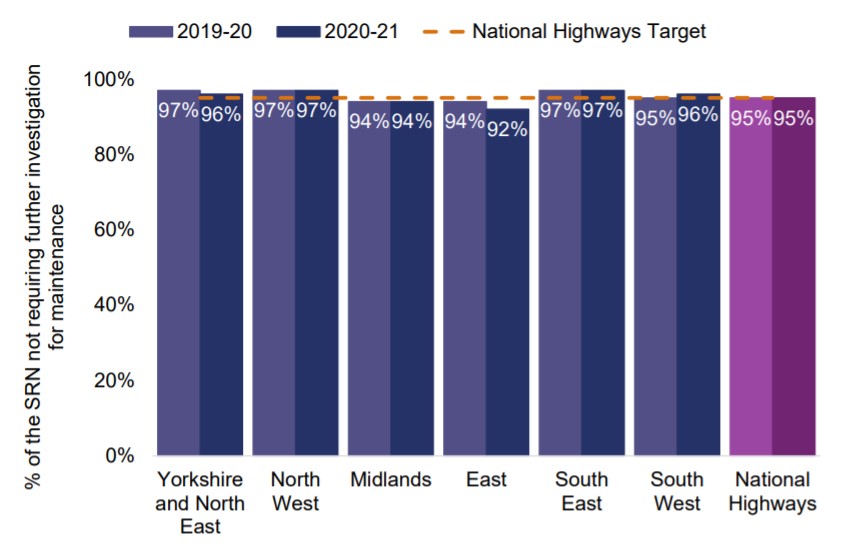 In 2020-2021, for the first time, the regional performance indicators were expanded to include those related to the condition of other assets: condition of structures, condition of drainage assets and condition of geotechnical assets.

The condition of geotechnical assets is “relatively even” across national highway regions. In contrast, there is a much higher degree of variation in drainage structures and assets (see table below).

For structures, condition ratings are based on the proportion of structures deemed “good” by an inspector. The “critical” performance indicator is based on the condition of the most critical elements of the asset. Condition scores for both structures are highest in the southeast.

In terms of drainage, the proportion of the network that has no observed flood sensitivity, through national flood mapping or reported flood events, ranges from 66% in the Midlands to 85% in the East.

The report adds: “This may be partly linked to the drier climate in the east of England although, apart from the east, it does not appear that areas with higher levels of rainfall have less good drainage resilience.” 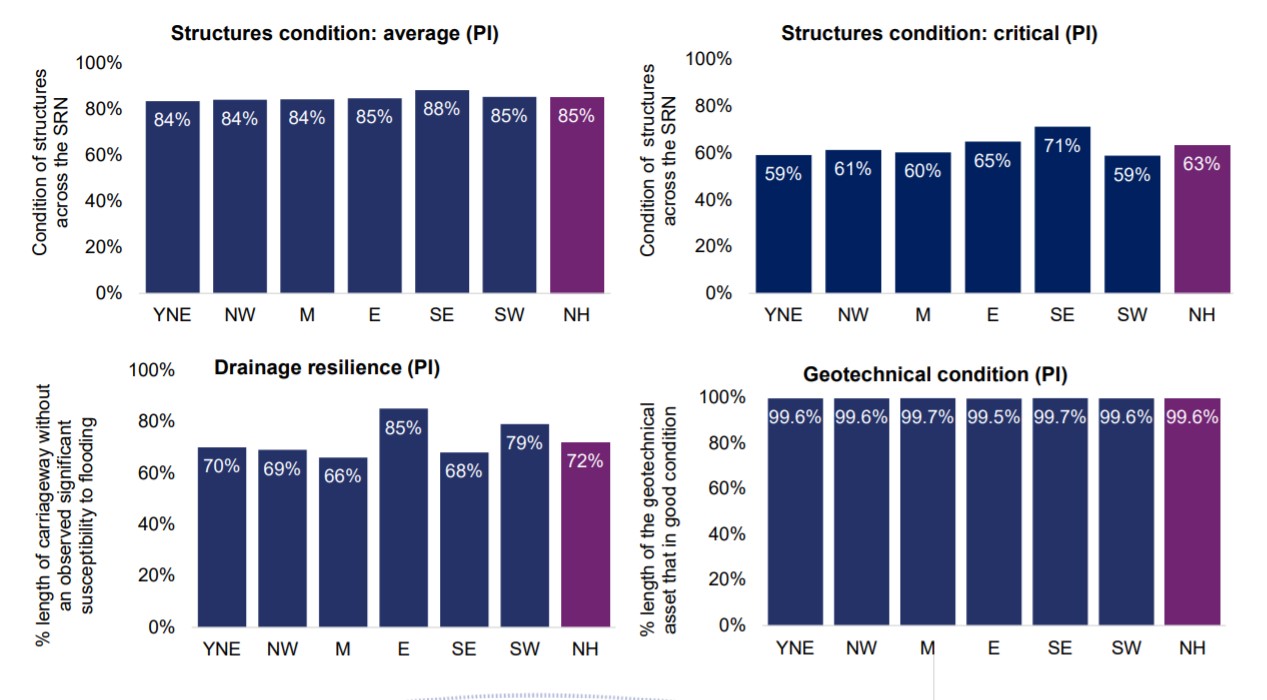 According to the report, the amount spent on maintenance and renewals can “vary significantly” from region to region. ORR “will undertake work to understand these differences in more detail and the drivers of the cost differences”.

One factor is the level of traffic on each network, with the ORR saying it “would expect national highways to spend more where traffic levels are higher and there is evidence to suggest that this is the case”.

Overall, the report outlines regional differences in performance between trunk roads and major A roads in England. Other areas considered include safety, providing fast and reliable journeys, meeting the needs of road users and achieving better environmental outcomes.

ORR’s Deputy Highways Director, Sneha Patel, said: “Our annual benchmarking report this year has led to greater transparency around the performance of national highways and will inspire its regions to improve further.

“We have now quadrupled the number of performance indicators on which national highways must report: this is a considerable step forward.

“However, there continue to be significant regional differences and we expect National Highways to apply the lessons it has learned about what works well in one region to other parts of the country as part of the measures. it will take to achieve all of the targets at the national level by 2024-25.”

Do you like what you read? To receive daily and weekly New Civil Engineer newsletters, click here.