Monarch butterflies, one of North America’s most iconic insects, are increasingly plagued by a debilitating parasite, according to a major new analysis. the Journal of Animal Ecology released the findings, led by scientists at Emory University.

The analysis was based on 50 years of data on the rate of infection of wild monarch butterflies with the protozoan Ophryocystis elektrosirrha, or OE. The results showed that the rate of OE infection rose from less than 1% of the eastern monarch population in 1968 to 10% today.

“We are witnessing a significant change in a population of wild animals with a steadily increasing rate of parasitism, going from almost non-existent to 10%,” says Ania Majewska, first author of the article and post-doctoral researcher at the research department. of Emory. Biology. “It’s a signal that something is wrong with the environment and we need to pay attention.”

The OE parasite invades the gut of monarch caterpillars. If the adult moth leaves the pupal stage with a severe parasitic infection, it begins to ooze fluids from its body and dies. Even if the moths survive, as with a milder infection, they do not fly well or live as long as those that are not infected.

Rising parasitism, researchers warn, could endanger the massive migration of monarch butterflies, one of the most spectacular spectacles in the animal kingdom, involving hundreds of millions of butterflies. Each fall, the western monarch population travels hundreds of miles along the Pacific coast to overwinter in California. Meanwhile, across the Rocky Mountains, Eastern Monarchs fly from as far north as the Canada-US border to overwinter in central Mexico, covering up to 3,000 miles. .

“Our results suggest that tens of millions of eastern monarch butterflies fall ill and die each year from these parasites,” says Jaap de Roode, Emory professor of biology and lead author of the study. “If infection rates continue to rise, fewer and fewer monarchs will be able to survive to migrate to their overwintering sites.”

One of the factors contributing to the increased rate of parasitism is the increased density of monarchs in the places where they lay their eggs, according to the study. The researchers posit that the increase in density may be due to many factors, including loss of wildlife habitat; large-scale planting of exotic and non-native species of milkweed; and by people raising monarchs in large numbers in confined spaces.

Co-authors of the paper are Sonia Altizer and Andrew Davis from the University of Georgia Odum School of Ecology.

Majewska began studying monarchs eight years ago when she was a graduate student at the University of Georgia. She joined the De Roode laboratory at Emory in 2019, funded by the NIH Fellowships in Research and Science Teaching program.

“Monarchs are amazing animals,” she says. “Each one is as heavy as a paperclip, but they can fly very far and they’re incredibly resilient.”

The Monarch Butterfly Biosphere Reserve in Mexico, where eastern monarchs overwinter in pine and fir forests, is a World Heritage Site and a major tourism revenue generator. “Trees can become so heavy with monarchs that sometimes the branches break and fall off,” says Majewska. “When sunlight hits the clusters, the monarchs explode like confetti. It’s a magical sight.

Butterflies arrive in large numbers in Mexico near the Day of the Dead, when families gather around the graves of their loved ones. For traditional cultures in the region, monarchs have come to represent the souls of ancestors who return to visit for celebrations.

In addition to the natural beauty, economic and cultural significance of monarch migration, it plays an ecological role, as butterflies pollinate plants and provide food for wasps, ants and other invertebrate predators.

Birds, however, tend to avoid monarchs, as the butterfly’s striking orange, black, and white coloring is a warning sign that it may be poisonous to them. 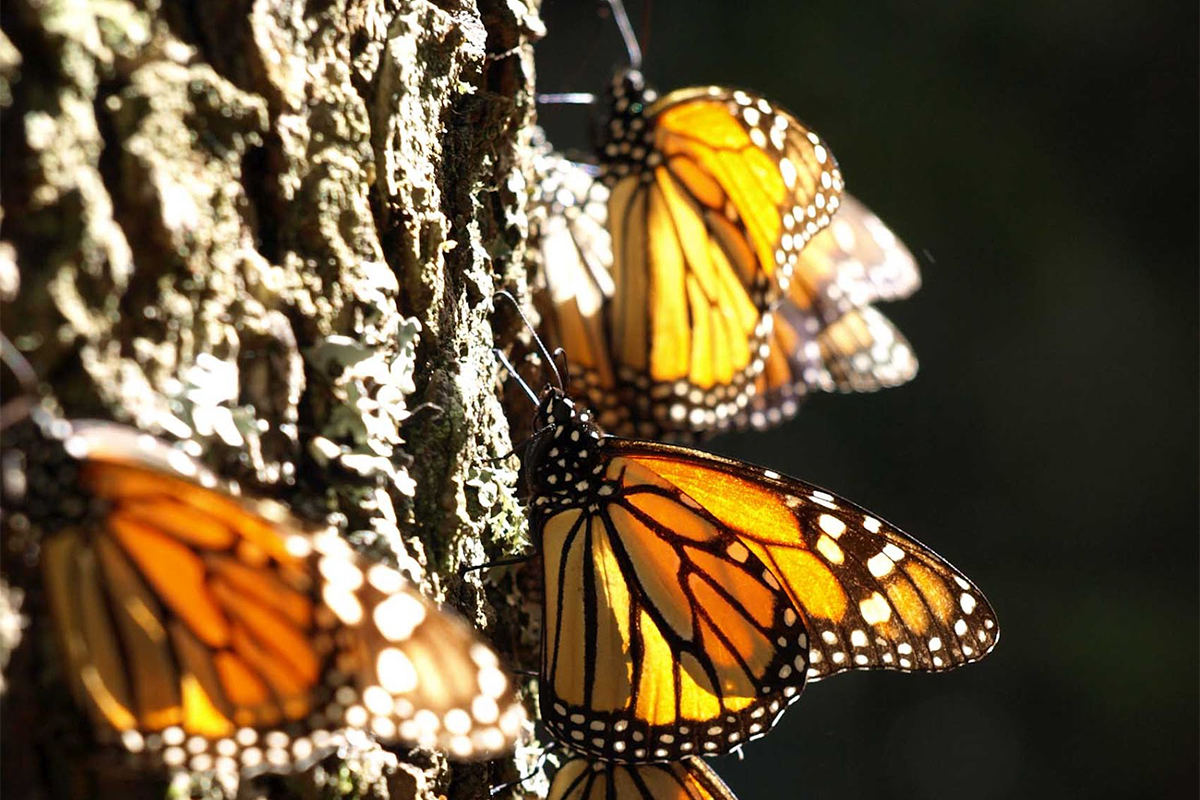 Monarchs wintering on a tree in Mexico.

When monarchs leave their wintering grounds in the spring, they fly north and lay their eggs. Their caterpillars feed on any of dozens of species of milkweed plants, including some species that contain high levels of cardenolides. These chemicals do not harm the caterpillars, but make them toxic to some predators even after they emerge as adults from their pupae.

In 2010, Jaap de Roode discovered that monarch butterflies also use cardenolides as a kind of drug. Experiments in his lab showed that a female infected with the OE parasite prefers to lay her eggs on a poisonous species of milkweed rather than a non-poisonous species. Uninfected female monarchs, however, showed no preference. Although cardenolides do not cure caterpillars of parasites, they can lessen the severity of an infection.

For the current paper, the researchers wanted to study the rate of OE infection in monarch populations over time. They accessed several available datasets, which primarily concerned eastern monarchs. The data included samples dating back to 1968 collected by the late Lincoln Brower, an entomologist who specialized in monarch butterflies, and by other researchers over the decades. 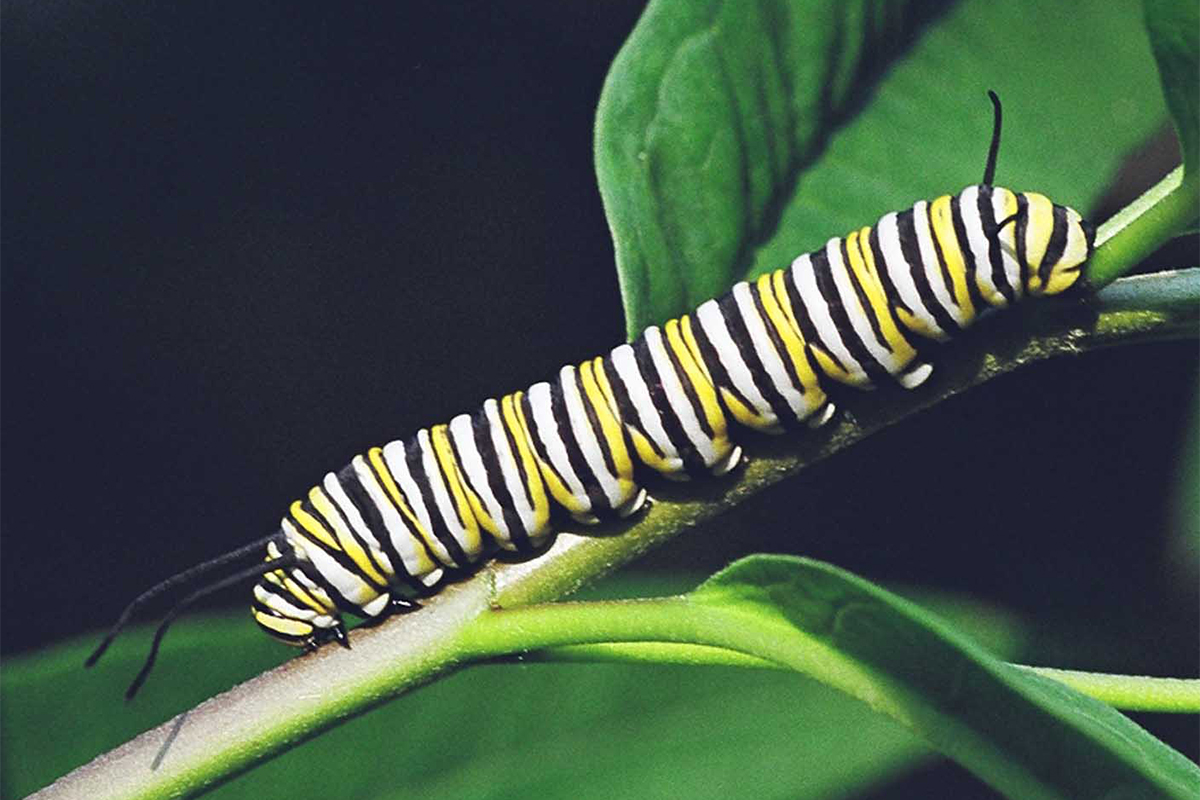 The results showed that the rise in the rate of parasitism remained low in the eastern monarch population for several decades before surging from the 2000s and then experiencing a slight decline in recent years.

Among the factors that may contribute to increased monarch density associated with increased parasitism, the researchers note, are loss of natural habitat and agricultural practices that have reduced where milkweed roosts. find. Milkweed was proliferating amidst crops in the Midwest, for example, but farmers are increasingly using genetically modified crops that are resistant to herbicides. This allows them to spray their fields to eradicate weeds.

Since milkweed is the sole food source for monarch caterpillars and fewer plants are available, female monarchs must cluster more densely to lay their eggs and butterfly “nurseries” become more crowded with caterpillars.

“One thing the COVID-19 pandemic has taught us is that social distancing can help reduce the spread of an infectious disease,” de Roode says. “The same goes for monarchs and the OE parasite.”

Around the year 2000, the researchers note, conservation groups began planting exotic species of milkweed in an attempt to sustain the declining monarch population. Ironically, this conservation effort may have fueled more parasitism. “Exotic species of milkweed tend to have more cardenolides than native species,” Majewska explains, “so infected female monarchs may seek out the exotic species, which adds to the density problem.”

The researchers further hypothesize that people raising monarch caterpillars in large numbers—to support conservation efforts or for commercial purposes—may keep them in crowded conditions that promote the spread of the parasite.

“Ultimately, a continued increase in the monarch parasite infection rate could cause the species to suffer significantly,” Majewska said. “If tens of millions of them die each year from parasitic infections, then an extreme weather event during winter in Mexico could reduce the population to a level that could be dangerous for their genetic diversity.”

“Parasiticism is often overlooked in conservation efforts,” adds de Roode, “but our findings show how parasites can have a massive impact on wildlife.”

/Public release. This material from the original organization/authors may be ad hoc in nature, edited for clarity, style and length. The views and opinions expressed are those of the author or authors.View Full here.
Share. Twitter Facebook Pinterest LinkedIn Tumblr Email